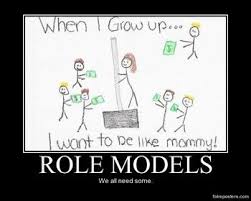 Did you have a role model growing up?  I mean someone other than your mom or   dad?

I did – it was my godfather.  He was a doctor.  He died tragically in a car accident when I was 13, but even before that, I knew I wanted to be like him.  I wanted to be a doctor.  I never actually saw him working as a doctor, except when I would go see him at his office for a cold.  But somehow I knew what he did and I wanted to do the same.  My mother always tells me that when I was about 3 years old he put a stethoscope in my ears and let me listen to the sound of my own heartbeat.  She’s convinced the seed was planted then.

It’s “Occupation” week at my daughter’s pre-school.  The school sent out a notice asking if any parents would like to speak to the class.  Of course, my husband volunteered me.  I took daughter to school today and spoke to her class.  Imagine about 20 sets of eyes staring up at you, eagerly awaiting what you have to say.  I was scared out of my mind.  There I was, frightened by a group of pre-schoolers.  How absurd!  I hadn’t really done anything like this before. I didn’t know what to say!  Husband actually coached me a bit.  I was just going to go there and talk about being a doctor but he suggested I ask the kids questions instead.  It was a bit of a gong show – I mean, how long can a group of 3-5 year olds sit still?  About 2 minutes, I learned today.

As an aside — I have nothing but the utmost respect for early childhood educators.  Reigning in a class of 20 3-5 year old children requires a special kind of patience.  It is something I lack.  Good thing I’m not a teacher!

Anyway, back to the topic at hand.  One of the reasons I was so nervous is because it suddenly occurred to me that I’m the grown up  to these kids. Something I say to this group of children might plant that seed of hope, determination and drive.  One of those kids might decide to become a doctor because of me.  (I hope it’s my own child, but that’s another post!) It dawned on me that   I am the potential role model! It’s a little unsettling.  I still think of myself as the 20-something girl working her ass off to get into medical school.

But now I’m a mother, a professional, a responsible adult! A role model.

When did that happen?