No, I’m not talking about Yersinia or Ebola.  I’m referring to this nasty little guy —  Rhinovirus. 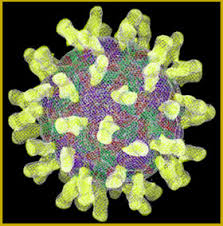 The common cold has been making quite an appearance in the last month, causing coughs and runny noses that are lasting up to a few weeks!  It’s been rather crazy in the office these days with the number of people coughing up, what seems like a few lungs a day.  I feel like I’m reciting a script – “You have a cold.  It’ll run it’s course.  An antibiotic won’t help. Get some rest and drink some fluids.”

My daughter had a phlegmy cough, for at least 3 weeks I think.  Never had a fever.  Clearly viral.  She knows how to do the “sleeve cough”.

I have seen her do it – at school, at her grandmother’s house.  But does she remember to do it at home?  No, not so much.  She gets into these coughing fits at bedtime when I’m lying next to her reading a story.  I can’t count the number of times she coughed directly into my face over the past few weeks.  So sure enough, last week I developed a tightness in my chest and an irritating cough that has now progressed a similar cough my daughter had (and my husband now has too).  Thanks, kid.

I used to pride myself on my strong immune system.  Since that first year of medical school (where I was sick as a dog for months) to the day my daughter was born, I hadn’t had so much as a cold.  While everyone around me was dropping like flies, I was healthy and never sick. And then I had kids and it all went downhill from there.  Since my daughter was born in late 2008, I have had at least one or two colds each year.  I got so sick one day last spring that I actually called in sick!!  Unheard of for me.

So here I am, hacking away between patients, struggling to talk with a throat that feels like sandpaper and I’m seeing patients who are “sick” and need antibiotics.  Come on, people.  Suck it up.  It’s just a cold.  If I can get up and go to work, so can you!

2 thoughts on “The Fall Plague”