On this last day of 2012, I ran 7.19 km.  It was the farthest I’ve ever run.  I did it in 54 minutes and 14 seconds.  I surprised myself.  The thought of running 10 kilometers 6 months ago?  Yeah… riiiight.   Yet, I find myself approaching that goal and I’m not even sure how it happened.  Which leads me to the title and subject of this post.

Ah… just when you thought you’d heard the last from me in 2012.  But alas, I return with some further thoughts – lucky you!

Part of me hates the holiday season.  Why? you may ask.  Well, it seems that disease decides to rear its ugly head during the most inopportune time.

I remember the case of a 50-something year old woman several years ago who came in to the walk-in-clinic I was working at on December 20. She didn’t have a family doctor, in fact, hadn’t seen a doctor in many years.  She was complaining of abdominal pain and fatigue, which she said was new but on further questioning she admitted she hadn’t been feeling well for months.  Her family finally made her come to the clinic because she was looking yellow.  Indeed, she was jaundice and upon examination of her abdomen, I felt a mass near her stomach.   An abdominal ultrasound later that day revealed a large tumor of the pancreas.  Her blood work was very abnormal.  I referred her to the local hospital, where she was admitted and died 2 weeks later.

A few years ago, around December 19, I received a very abnormal prenatal ultrasound report.  The patient was already aware as the result had gone to her OB first, and by the time I called her, she had the amniocentesis which revealed a lethal chromosomal anomaly.  On December 23, she delivered her daughter and spent the rest of the holidays mourning the loss.  A year later, almost to the day, a healthy, bouncing baby boy was born.  (This one kind of had a happy ending, sort of.)

This week, I have had to tell two women that they are going to miscarry.

And now, my thoughts are occupied with a young woman, my age, whom I suspect has thyroid cancer.  I am working my ass off today to get her an appointment with a surgeon, before the end of this year.  Why does this shit go down days before a holiday?!  WHY?!  I don’t want to be responsible for ruining someone’s holiday, or worse yet, starting someone’s New Year with news of cancer?  This is the part of my job that truly sucks.

Why can’t disease wait for January?

It’s December 20.  This could be our last day on Earth, if the Mayans had it right.

Have you seen the movie, 2012?  Oh goodness, it’s one of my favorite disaster films.  Did I not mention that in my bio?  I LOVE disaster movies.  Disaster movies are my go-to films when I am feeling down, or sick, or both.  I recognize that I may need some professional help.

As the end of the year approaches, I started to compose a list of events that defined the year for me.  I tried to put it in a poem (just to be different), but who am I kidding, poet I am not.

Overall, it was a good year.  There were certainly a few bumps in the road, but that is life.

To all my friends (past and present), and to my readers,  I wish you all a wonderful holiday season and a healthy, happy and prosperous 2013.

I write this as my daughter paints.  She loves painting and I love watching her creations come to life, more so today than any other day.  She has been sick all week with a high fever and cough, (likely Influenza A), and today is the first day in a week that she has expressed a desire to do something other than lie on the couch.

To my eye, this looked like a self-portrait.  So, I asked her, “Is that a picture of you?”

“Who taught you about zombies?”  I asked.

When does a child lose their innocence?  Seems like a silly question after the events this past week.  Certainly there are many children whose innocence was lost at that elementary school.  I am grateful my daughter is young enough to be oblivious to the news.  My husband and I were very careful not to discuss it at all around her.  In fact, we barely discussed it at all.  I couldn’t read my twitter feed, nor Facebook.  It was  just too much.

Instead, I held my children extra tight that evening, grateful that they were safe.  I’ll contemplate that question of  innocence on another day.  For now, she is here, healthy again, painting in her smock and happy.  On this Sunday afternoon, that’s enough for me. 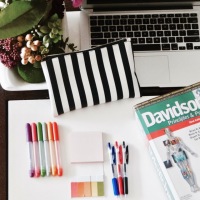