Well for someone who swore they would never run a race, I popped that cherry today and then some!

It was a beautiful winter day, one of the warmest I’ve run in fact, a balmy -6°C (-10°C with wind chill).  I met up with L and her friends at the designated area inside the performing arts center. Honestly I felt a bit weird being among all those runners. They looked all way more qualified than me to be running a race.

After a few quick bathroom visits (only one for me!),  it was time to walk to the start line. There were several of the half-ers doing some warming up and I saw one with something like a tube coming out of their shirt and asked L what the heck that was – apparently it was a camelback! Brilliant!

We got to the start line and there were a few hundred ahead of us. Next to where we were standing was a mom and her son. I asked the boy how old he was as he looked like my daughter’s age.  He said he was six and this wasn’t his first race.  Um … okay.  Mom said he would finish under 45 minutes, maybe 40 minutes.  Finally, we heard the countdown and started walking up towards the start and off we went. Before the race, L and her friend said I was going to set the pace and by the end of the first kilometer we were under well under 7:00/km which was just fine with me though it was a bit faster than I wanted so I deliberately slowed my pace a bit and ran most of the time just a few strides behind them. There was a bit of chatting but by 2 km I stopped talking and just focused on the road and my breathing. L asked if I wanted to walk and I said no. And then we saw the leader of the 5 km race running towards us on the other side of the road.  I looked up his time – he finished the run in 15 minutes.

Suddenly we reached that the halfway point, made our turn and headed back.  Already I was sensing this was going to feel like the fastest 5 km I’d ever run even if my time didn’t reflect it.  At 3 km I was asked again if I was walking and I said no. I did slow down a bit as the girls got ahead of me a little but they slowed for me so we were still running together. Then we saw the 6-year-old running just ahead of us as the 4 km marker approached and he stopped to walk with his mom. As we made our turn, about 200 meters from the finish L said “We are gonna beat that 6-year-old. Let’s go!!!!” And we hauled ass to the finish.  I tried to look for my husband and kids but realized I needed to focus on not falling over my feet.  I crossed the finish line just a second or two after my friend.  A minute later, I heard my daughter calling for me and turned towards the sidewalk and found her.  I ran over to her and hugged her across the barriers and then she gave me the medal she made for me.  It was a special moment I will never forget.  A few minutes later we picked up our real medals. 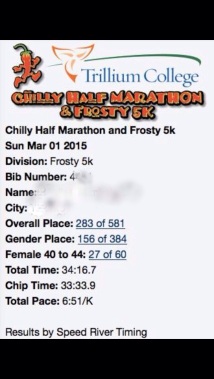 The official time of 33:33.9. A personal best for sure (especially since there weren’t any walk breaks!)

Seeing my daughter at the end. 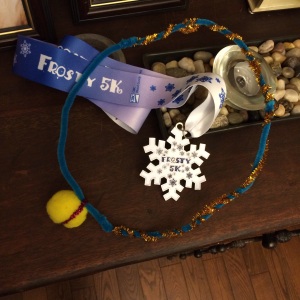 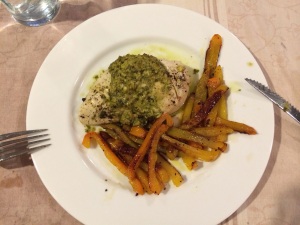 8 thoughts on “A Race Virgin No More.”