Yesterday I set out for a long run. Had planned 10km but with the new shoes (Asics Gel Nimbus) and better eating this week, I felt pretty good and flirted with the idea of pushing my body and going longer. I signed up for a 10km race which is happening in a few weeks so this would likely be that last long run until then.

I’ve been to two Pilates sessions in the past couple of weeks and got some great tips on how to loosen up my hip joints. I did a lot of dancing as a child and was always taught to “tuck in”. I suppose I never really forgot that because apparently it’s what is causing a lot of my issues. My SI joints are locked up and I am working hard to unlock them.  My instructor also suggested a few minor changes to how I run and I’ve been trying to incorporate those techniques. Overall I have been running with consciously tightening my core which in turns causes me to lock up my hip joints. That has got to change.

So during the early stages of my run yesterday, between 3-9km, I felt amazing. I felt like I was flying and my hips felt great. I almost felt like I was meditating.  By 10km though, I started getting tired and felt the SI joint acting up. I made a few adjustments and was surprised how it actually did help ease up the discomfort.

Before I knew it I was home and finished my longest run to date. 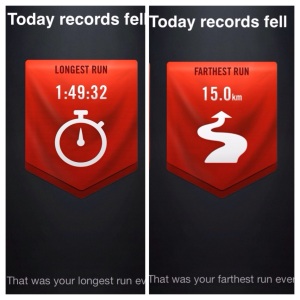 I was also able to finally test out my two-bottle water belt. It felt a little awkward initially but I soon got used to it and was so glad to have my hands free.  I’ll definitely be using it for the race.

This morning my legs certainly noticed the subtle differences I incorporated in my run. My quads are sore but in that good way. Nothing a little foam rolling won’t cure. 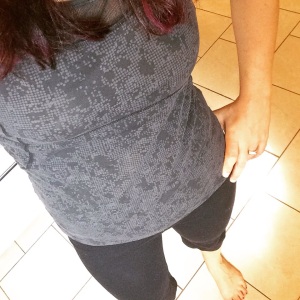 Anyone who says running doesn’t work to lose weight or get fit clearly didn’t test their body.