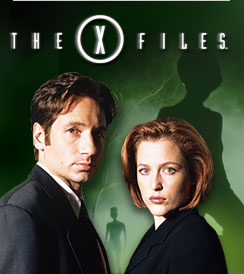 The X-Files are back and this girl couldn’t be happier.

I was a little worried about the revival – what if it’s awful and sucks? Will it tarnish the 9 previous years of the show?

I was a HUGE fan of the show.  Back in medical school, I would have my friends over  every Sunday night to watch the show and there was only one rule – no one was allowed to talk until the commercials.  My friends respected my geekness, for the most part.

I even got a tattoo during medical school which exemplified my nerdiness and passion for The X-Files.  Yes, I am that much of a geek.

Nowadays with the Internet and spoilers I was very keen not to read anything about the revival.  I couldn’t even look at pictures from the set.  I got goosebumps as I waited for the first episode to start after that silly football game ran over time.  When I heard the opening theme music and credits roll I think I squealed in delight.

There was just something so magical about that show.  I loved the dynamic between the two leads. I loved that Scully was a doctor and a scientist. (I even named my cat after her.) My favorite episodes were always the mythology ones.  Don’t get me wrong, some of the best episodes were the “monster-of-the week”;  “Home” anyone?

Even Scully, in last night’s episode, agrees with the audience that the monster-of-the-week cases were fun.

But it was the underlying mythology of the show that really sucked me in.  Are we alone? Do aliens exist? Is the Government lying to us? What really happened to Mulder’s sister? What is the black oil?  Who is Krycek?

There’s only 3 more episodes left to air in this revival.  That can’t be the end!  The ratings are exploding with every new episode. There has to be more!!!!!

3 thoughts on “I Still Believe.”