Further to my post earlier this week, that first batch of dough I tried to rise in the refrigerator did absolutely nothing.

I believe it had something to do with my starter. While there were loads of bubbles that I thought were yeast, the mixture wasn’t doubling. So I fed it some more and the next day magic happened. My starter doubled in size and I tried again.

This time though I didn’t rise the dough in the refrigerator. I instead left it in the oven all day and husband looked in on it. By the time I got home from work, the dough had risen to double and I made some bread. 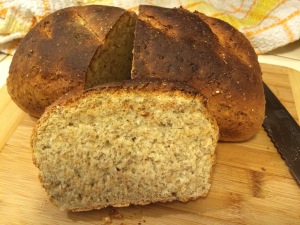 Apart from it being slightly under-salted and having an extra crispy crust, it was damn fine bread!!

4 thoughts on “A Breadmaker?”