It was a difficult year, to say the least. A few days into January, my father  had his first fall and we realized that my mom probably wouldn’t be able to care for him at home for much longer.  Over the span of a few months, there were more falls, more calls to 911 for assistance to get him up off the floor, and my brother and I convinced our mother that a retirement home was the next step.

I thought I was handling things well but by June the writing was on the wall for him. Darkness, the black hole of depression, started to consume me and I was failing everyone.

The year ended better than it started.   I worked my ass off at two jobs and kept very busy mostly to avoid thinking about it all.  I know that doesn’t sound like a good thing, but really, it was.  The only downside was that I basically stopped running.
But 2018 is done now, and so is the extra work and on new years’ day, I went for a goddamn run. It was glorious.  The sun was shining and despite the chill in the air from the cold wind, I think I was smiling inside the whole time.
Hello, 2019.  It’s nice to see you.

We adopted kittens on the weekend.  They are sisters, 3 months old and completely adorable.  George Carlin said that when you walk out of pet store with a dog or a cat that you are purchasing a small tragedy.  Having gone through the deaths of 3 cats in my lifetime, I know he’s right.

Yet here we are again.

These little creatures have brought a joy to my life that I didn’t know was missing. 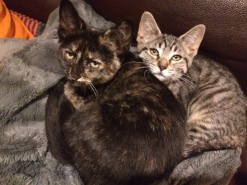 I wanted to say thank you to all the folks who reached out to me after my last post, most of whom I didn’t even know were reading the blog. It meant a great deal to me. That post sat in my drafts folder for over a week before I decided to publish it.

I’m away on a much needed break with my family. On top of all the mood stuff I was going through, I was also burning out from work. Or maybe it was the mood stuff causing the burnout or vice versa. Hard to know at this point. Being present for patients is really hard when I am barely present for myself.

I tell my patients that they have to talk about how they are feeling with friends and family when they get depressed or anxious. The old adage that doctors make the worst patients is true.

I didn’t take my own advice. I wasn’t talking about how I was feeling. There was guilt about my parents. Guilt about not helping my brother enough. There was shame for wanting to crawl into a hole and never come out. Shame for feeling weak and paralyzed; shame for the thoughts of death and dying I was having. And then there was the anger toward myself for falling into the black hole to begin with. I did it to myself. I was the one who weaned off her medication a year ago. I was the one who was arrogant enough to think I didn’t need them anymore. I had been feeling good for so long. Work was great, I was running and life was good. I didn’t need those pills anymore.

I had it all figured out.

But I forgot one thing.

Depression runs in my family. It wasn’t my first time getting sick. I should have known better. That’s the real kicker here.

I should have known better.

Now I have to sort through my ego and arrogance. It’s time to take a long hard look and regroup.

It’s so black you can’t see anything around you. You can’t see the love, the happiness, the light, the strength. When you fall inside, it wraps you up in a blanket and squeezes so tight you feel like you’ll never break free.

Even the thoughts are black.

“They’ll be better off without you.”

“You’re bringing everyone down.”

“There’s no point in fighting it anymore.”

Only there is a point.

It’s embracing the suck, asking for help and getting on with it.

For months I was slipping deeper into the black hole; ashamed to admit I was there again.

I finally asked for help and talked about it.

Now the time for reflection and self-healing begins.

We moved my father into a retirement home today and I’m a fucking wreck. 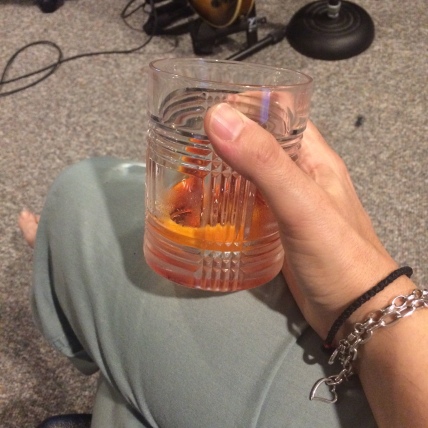 Tonight, somewhere, someone is dying with family by their bedside.

A cool cloth is placed on his forehead.

A mouth is wiped dry.

A hand is held.

A tear is shed.

A story is told.

I left you surrounded by your family. I was honored to have seen you one last time.

Death is an inevitable journey for us all.

I hope yours is peaceful.

This weekend I ran my 3rd half marathon race. Grossly undertrained, I might add. My longest run had been 17k a few weeks prior and I would be lucky if I got one training run in during the week. I considered switching my bib to the 10k but I couldn’t bring myself to do it.

I had no time goal other than to finish but if I’m honest with myself I knew I wanted to finish under 3 hours and certainly under 2:50. By some miracle or more likely sheer force of stubborn will, I crossed the finish line in 2:46:58. A minute slower than my previous effort last October and almost 10 minutes slower than my debut race in 2015.

About 10km into the race the outer aspect of my left knee started talking to me.

ITB. I haven’t experience ITB pain in several years. Uh oh. Not a good sign. A sign of undertraining in my opinion and poor post run stretch and foam roller etiquette.

But really, should I have expected anything different?

Oh and I probably needed new running shoes 6 months ago.

Now, on a training run I would pause my Garmin and stretch out my hip flexors but there was no way I was stopping on course. I knew that if I stopped moving to stretch I may not get started again. So, I just took extra walk breaks after 15 km or so.  Before that I was sticking pretty well to my 1 km run and 100 meter walk intervals. After 15 km it was more like run 400 m, walk 200 m and repeat.

Looking around me, though, I saw other runners struggling too. I asked if they were okay. One runner had his hamstring seize up. For another it was her ankle. Others were just walking. Eventually I found the power walker I had been chasing unconsciously for most of the race and passed her. Yes! Not gonna lie. That was pretty awesome. All told when I crossed the finish line and before they gave me my medal, I burst into emotional, cathartic tears.

Recently I’ve had several new followers and I feel compelled to start writing again to earn that follow-ship.  Yes, I clearly just made up that word.

I have no excuse for not writing other than the fact that I work two jobs, have 3 kids and elderly parents and am currently having the life sucked out of me by all of that.  But really,  I shouldn’t complain.  My immediate circle – my kids and my husband – are healthy and generally pretty happy, I like to think.  My daughter is thrilled to be making slime to share and trade with her friends.  My almost-7 year old has learned how to ride his bike with no training wheels and has started swimming lessons.  And the 4.5 year old is just … well, he’s happy tumbling around and being himself.

I, however, am overwhelmed.  950 patients in my family practice, a second job at a private health care clinic which is more demanding that I thought it would be, and an elderly declining father who has be move into a retirement facility because he is “too healthy” for a government long-term-care facility but not safe enough to continue to stay at home.  The decision to move him comes right before his 83rd birthday and 50th (FIFTY YEARS!) wedding anniversary.  It is not how I thought we’d be celebrating.

And to top it all off, I feel like I am not present for my kids enough and when I am I am often tired, frustrated and giving them shit for being kids.

But I think I have a solution…

It’s that time of year for resolutions, those things you decide you want to change or improve about yourself over the coming year.

I ran a good amount in 2017, about 750 km (give or take) over the year.  I had a few minor over-use injuries which isn’t new to me.  I ran a half marathon and had a 10km PB (personal best) race.  I joined a running team (more about that in a future post) and met a lot of extraordinary people, many of whom are survivors in one way or another and who run to stay mentally strong. They are an incredibly inclusive group of people from all walks of life who all love to run.  I feel lucky to have found them.

Being a parent is hard.  Being a parent who doesn’t raise her voice is exhausting.  I found myself in a cycle of yelling and saw its impact on my kids, my eldest in particular. Over the past 6 weeks both my husband and I have made a huge effort to lower our voices and I know with myself in particular, not yelling is hard to do. After asking my child to do something 3 times and not having it done, the only recourse I had, it seemed, was to raise my voice. It got their attention, but in a negative way. When I started hearing how they related to each other I realized they were emulating my behavior.  We sat down with all the kids one day and acknowledged the tension in the house and told them that their mommy and daddy were going to do better.  We asked them for help and it seems to be working.  Oh, I still find myself  yelling – I’m not a saint – but it is less than it was before.  I’m a work in progress.

I surf the net less when I’m reading a novel.

4. Complete another half marathon, or two.

I’m a glutton for punishment. What can I say?