– any foul or filthy substance, as mud, grime, dust, or excrement; earth or soil, especially when loose.

– something or someone vile, mean, or worthless: After that last outburst of hers I thought she was dirt

Just when you got all excited that this post was going to be juicy, I’m totally going to burst your bubble.   I, of course, am referring to the traditional meaning of the word dirt.  The stuff on the ground, the stuff that makes gardens, that grass grows out of … here, I’ll show you: 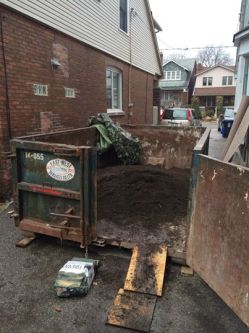 So, that’s my shared driveway and that bin is full of dirt.  At least half of the dirt I dug up yesterday, and with multiple (and I mean multiple) wheelbarrow trips, I dumped that dirt into the metal bin.  Who needed a run after that?  Certainly not me!
Spring has sprung at my house.  After the awful winter we had, ice storm and all, the backyard was a mess.  The koi didn’t survive the deep freeze, the pond was a mess, so husband decided it was time to think about a backyard reno.  With three kids soon to be running loose, real estate in our backyard is essential.  We had a raised garden that we built 7 years ago but it’s been a yearly struggle to get anything to grow in it (what with the raccoons, squirrels, and neighborhood cats walking through it), so a decision had to be made.  Level the raised garden, or at least, reduce it.  But what about all that dirt? How the hell do we get rid of dirt?
So, husband spent almost a full day researching dirt removal and found a company that would rent us a bin and dispose of relatively clean dirt (ha! there’s any oxymoron).  The bin arrived earlier in the week and husband set out to work.
With Friday being a holiday, it was my turn to contribute.  So I got out there and started moving the stones that we set up 7 years ago.  Talk about deja vu! Once the stones were moved, the dirt came next.  Before I knew it, most of the day was gone and suddenly every muscle in my body felt like jello. 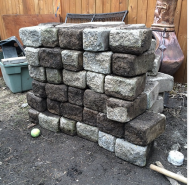 It may not look like a lot, but those stones go back about 4 feet and each stone probably weighs about 20 lbs.  My daughter helped me move some too, but she disappeared after moving the 5th or 6th stone.  She decided it was more fun to play in the dirt bin. (I don’t blame her).
I’m excited to see the finished product.  The kids will have more room to run around, the adults will get a patio and hopefully we’ll have a brand new pond as well. But for now, it’s time to get back to work.