You are cordially invited to treat your ears to the sounds of “an album of sensitive tracks, each with the potential to fill the dance floor. A masterfully intense showcase of sound. Not just a series of tracks but time well spent.” louderthanwar.com

My husband stays home with our kids.  He is a musician at his core.  He is a talented songwriter, guitarist and vocalist.  I was proud to play live keyboards with him for his first band before we had kids.  I always dreamed of marrying a rock star and I can honestly say that that dream came true.  His songs are his truth.

Last spring he was asked to take over vocals for an electro-EBM band called Atomzero.  After several months of songwriting, laying down tracks and finalizing production (all of this in between school drop offs and naps), they finished the EP, shot a video and released their album last week.

I couldn’t be a prouder wife.

And it feels amazing.

After my epiphany last weekend, I’ve gone out twice more and have felt great.  The baby has also started sleeping through the night this past week, so I’m pretty sure that is playing a huge role in how I’ve been feeling.

Remember this post about sleep and weight loss?  Well, I have to say that after four solid nights of sleeping 8 hours, I am feeling sveltier than I have in months.  So vain, I know.  But come on, after 3 kids you can imagine the flabbiness, right?  I am down another few pounds and seem well on my way to getting back to the pre-pregnancy-#3 weight.  I will never be the weight I was when I got pregnant with my first child.  That is just so unrealistic.  But, the next 10 lbs seem to be well within my grasp.   For me, it has always been about getting the right amount of sleep, exercise and eating healthy.  I’ve cut back a lot on the sweets and thankfully don’t have to do any crazy fad diets to get the weight off.  Day after day, patient after patient comments on how slim I am looking and while I appreciate the compliments, it is a little strange.  I’d rather show off a picture of my children then discuss my weight, but I genuinely think it comes from a sincere place though it is a bit embarrassing at times.

Anyway, so back to the reason for this post!  Last night I felt like going for a run.  I didn’t know how far I would go, so I just set out with my interval plan and had some good music to go along (Ferry Corsten). My legs felt pretty good overall, though at the beginning the shins and calves were a bit tight.  During the 1 minute walking interval, I often stretch the lower legs out and that has really seemed to help.  By the last interval I felt like I was picking up some speed and felt in the zone.  I have to say, I have not felt that for quite some time.  It was amazing!!!!!

I know I said I wasn’t going to focus on distance or time, but when I was done and went to turn off the apps, I was thrilled to see I had done 5km and even more impressed by the time because it really did feel like I gained some speed during the last kilometer and it was certainly reflected in the split time.

For the first time since I’ve been plagued by injuries, I feel like my legs were made for running again.  I think I’m still feeling the runner’s high. 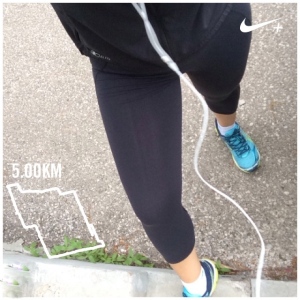 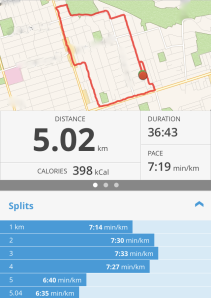 Well, it took 4 days but I finally recovered from my first run last week. I wasn’t surprised how much I hurt, after all, I did just get cut open and  have a new human being removed from me not too long ago!  I’ve been counting the days until I could go again.  And, yesterday was that day.

When I started running last year, I went out with only my cell phone so I could “MapMyRun”.  I didn’t listen to music, or the radio, or an audiobook.  I loved listening to the sound of my feet hitting the pavement.  It wasn’t until much later that I started listening to music.  Of course, it made for much more interesting running as well as encouraged a quicker pace. I decided that to keep me motivated on these early runs, it might be worthwhile to listen to music.

While perusing Pinterest, I’ve seen a lot of pins for running songs, ie. “100 best running songs”, “top 10 running songs”, “summer running songs” etc.  I’ve looked at a few and thought, “Meh, I can do better”.  As I talked about in my post Music, I am a sucker for a good hook.  If a song has a good beat and melody, I will probably like it.  So, before my run yesterday, I went through my music list and compiled a running mix.  Here’s what played on my run:

So let me ask my followers who run – What do you listen to?

The challenge is to write something about music; a song that represents you — that you could consider as your “intro music.”  As it turns out, this is pretty easy to write about.

I grew up with an older brother who was heavily into heavy metal.  Coming home for lunch meant I was listening to the likes of Iron Maiden, Motley Crue, Judas Priest, you get the drift.  This was the early-mid 80’s.  Glam rock was just starting, but new wave was well on its way and it was music that I really didn’t care for at the time.  With an older brother constantly blasting rock and roll music, it’s not hard to see how I became a metal head.

Ah … the metalhead.  I wish I had looked like that in high school.  While most of my friends were listening to the likes of Madonna, Whitney Houston, and New Kids on the Block, I was deeply entrenched in the metal scene.  Well, actually, that’s not true.  By the time I was in high school I was listening to a lot of glam rock. Poison, Slaughterhouse, Ratt, you name it.  I was known in high school as the metal head.  Dance music and “pop” was not my style at all.

Eventually the glam scene died out and was replaced by the Seattle “grunge” scene.  I was a huge fan of Nirvana and Pearl Jam for many years.  The death of Kurt Cobain hit hard, so hard in fact, that I actually wrote a letter to the editor of Time Magazine (which was published) after his suicide.

I remember the later 90s being somewhat devoid of music for me.  Shockingly, only one song sticks out – “Tubthumbing”.  Don’t laugh!!!    It was a big hit for me in 1997.  I remember it so well because at the time I was living on my own with my then best friend and just starting to discover who I was.  We were two girls on our own, going to school, living  in the city.   It was a great time.

The very-late 90’s was a major turning point in my taste for music.  I was a graduate student in Physiology.  A fellow grad student made me listen to something called “trance”.  I told him repeatedly that I wasn’t into dance music.  He persisted. I’m so glad he did.  The album he put on for me was Paul Oakenfold‘s Tranceport 2 ( below is track 1 only).

I know this will sound cheesy and cliché, but my life changed that day.  Music suddenly made sense to me again, the rhythm, the beat, the hook – it moved me, it spoke to me. It was a profound moment. I got goosebumps.  I am forever grateful to my friend for introducing me to trance/electronic music. I still listen to it today.  I am introducing my children to it as well.  Walk into our house on any given Sunday and you just might find a little dance party going on.