Tonight, somewhere, someone is dying with family by their bedside.

A cool cloth is placed on his forehead.

A mouth is wiped dry.

A hand is held.

A tear is shed.

A story is told.

I left you surrounded by your family. I was honored to have seen you one last time.

Death is an inevitable journey for us all.

I hope yours is peaceful.

She stepped over the threshold of their home, a visitor.  Through the doorway the hospital bed was visible and the hiss of the oxygen tank audible. She heard the patient’s voice speaking in his native tongue, French. His son whispered in her ear that he was talking to family abroad. She stepped into the room and put her bag and coat on a nearby chair.  He waved to her, finished his call and gestured for her to come closer.  She took his hand in both of hers and squeezed.  He thanked her for coming.

The hour passed quickly. She learned that his wife, having been always very demure and quiet in the office, was quite the spitfire at home.  His wife chastised him for wanting an ounce of red wine when he was barely eating any food. Though he was hungry at times, he could only eat a few mouthfuls before the nausea set in, this despite being on the appropriate medication to aid in controlling his nausea.  She explained that slowly his need for food would diminish and that would be okay.  So long as he could enjoy sipping on water, juice, or wine, that would likely be enough.  She learned that he enjoyed doing puzzles.

At one moment, he looked her in the eye and asked if she could help him go.  Tears welled up in his eyes.  Then in the next breath he said he wasn’t ready.  She reassured him that these emotions were normal.  There would come a time when he would become less aware of what was happening and so she reminded him to say the things that needed to be said now while he still had the chance.

She forgot about the tea that had been offered and accepted.  He told her to drink it before it got cold.  He asked for water, then said he was tired and wanted to rest.

She said goodbye and squeezed his hand again.  She said she’d like to visit again soon. He said he’d like that.

Yesterday, a news story came up on my FB feed.  I’m still thinking about it and trying to figure out how I feel about it.  I decided to write about it, hoping it might help me process my thoughts.  It’s about a 29-year-old woman with stage 4 brain cancer (glioblastoma, the same kind of tumor that Dr. Greene (Anthony Edwards) on ER had) and she is going to die on November 1.  She lives in the U.S., in a state where, apparently, there are laws in place that allow patients to take their own life when terminally ill.  She states she’s not committing suicide, rather, she is taking control of her illness and deciding when and how she will succumb to it, not the other way around.  Most of the comments posted after the article are all like, “Wow, what a brave woman”, “Good for her”, “I’d do the same”.

Really?  I was kind of surprised that no one seemed to question the ethics here.

I can’t even begin to imagine what this woman is going through. To be diagnosed at such a young age with terminal cancer, it’s truly heartbreaking and tragic. One of my colleagues said she’d probably do the same if she were in that situation.  I’m really not sure I would, to be honest.  Or maybe I would? How can one ever know until faced with the reality?

I have three children.  This young woman has none.  Would her decision change if she had kids?  How would you explain to your children that you are going to end your own life before the cancer gets a chance to?

Death is a natural part of life – granted, dying at 29 doesn’t seem all that natural.  Dying at 90 on the other hand, does.  Still, we are all going to die, none of us can ever know when or how, that is, unless we are diagnosed with a terminal illness and even then, no one really knows how long we have.  Last spring, I visited a patient dying of prostate cancer. I saw him about 12 hours before he passed, peacefully, at home, surrounded by his family. When I spoke to his wife the following morning, she struggled with the fact that she was asleep when he died.  I wondered if it would have been easier for her to witness his death? I’m sure it would have been difficult regardless.  To the very end, my patient hoped and prayed for a miracle.  It was never stated, but you could see it in his eyes. He didn’t want to die; he didn’t want to leave his wife and children. He should have had more time. He kept fighting to the very end.  I admired him for that.

I have a hard time knowing that this young woman is going to actively end her life. That she picked the day she was going to do it, much like one picks a wedding day.  It’s two days after her husband’s birthday.   She has been told there is no cure, that her final days will be spent in pain, perhaps with multiple seizures and it’s not something she wants her family to witness.  I understand that, I really do, but there are ways of helping dying patients be more comfortable in the final stages of life.  It’s the whole reason Palliative care exists.  The process of dying has to remain a natural part of life, once we start helping patients to die, we no longer adhere to the Hippocratic Oath, in my opinion.

First, do no harm.  A physician, in good conscience, cannot be a party to the death of another human being. I can already hear those on the other side of the argument – NOT assisting a patient to “die with dignity”, causes harm.  I don’t believe it does and I don’t think this is what Hippocrates had in mind when he wrote the Oath.  I don’t wish for any individual to suffer on their deathbed, far from it. Medicine has come a long way in the past 150 years – expected death can be painless for the vast majority of patients.  I think we are actually inviting more harm to patients, their family, and society as a whole if we decide that assisted suicide, euthanasia, dying with dignity – whatever you want to call it – is okay.

In the next few days, a family is going to lose a parent, a sibling, a friend, a partner, a lover. This is a family who has come together at the end, in grief and in love.

I witnessed a small piece of this today.

With a heavy heart I knocked softly at the front door, taking note of the “No Smoking, Oxygen in Use” sign.

Upon entrance into the home, the sound of the oxygen tank was heavy in the air.  A hospital bed could be seen down the hallway in the living room, and lying in it, my patient.  I forgot how one looks during the final hours of life. It caught me by surprise and a lump formed in my throat.  I approached the bed and touched my patient’s hand.  I said hello, as the personal support worker washed my patient’s feet.  I am not religious but was instantly reminded of Mary Magdalene washing the feet of Jesus as he hung on the cross dying.   The living room was transformed into a makeshift hospital room.  Bedpans, sheets, syringes, bottles of medications, all visible on the bookshelf and lined up meticulously, within easy reach. But this was someone’s home – unopened mail on the coffee table, hospital brochures on dying at home scattered underneath.  Half-read books on the couch, an afghan and pillow rested in the corner.

Surreal doesn’t even begin to describe it.  The family and I talked, mostly about their loved one and the events of the past few weeks, but also about their plans after the funeral;  the trip they will take this summer, to scatter the ashes; the arrangements for the funeral.

I walked for a while after the visit.  Trying to clear my head. Trying to imagine what that family is going through, watching their loved one dying in front of them. I wished, for just a moment, that I was religious.  Maybe believing in God would help me understand this process of death, what it means and what it leaves behind.

Yea, though I walk through the valley of the shadow of death, I will fear no evil: for thou art with me; thy rod and thy staff they comfort me.

It’s been a difficult day.

One patient whose wife has terminal lung cancer came to see me today.  I plan on doing a home visit later in the week.  He came for his own medical issues, but we talked about his wife.  He put on a brave face but he is devastated.  Married for 36 years, second marriage for both, this wasn’t supposed to happen to them.

Another patient, in a long-term relationship, just isn’t “feeling” it with her partner anymore.  She hasn’t for a long time, yet remains in the relationship and complains regularly of episodic pain which has been investigated more times than I can count.  Her tests always come back normal.  She left her partner last year for a time, actually started dating someone new but then returned to the long-term relationship.  It would appear that the break really didn’t do much for her.  She still doesn’t know what she wants, yet isn’t ready to take the final steps.

Both of these people have to let go, in different ways.

At some point in all of our lives, we have to let go of something, or someone. Whether it is in death, or simply a parting of ways, it’s not easy.  I struggled to find the words for the gentleman whose wife is dying.

And I just got word another patient has likely entered the final stages of his journey and is now actively dying.

All of this in one day, within a few hours.

I need a drink.

I feel completely overwhelmed with my job today.

I need to let these people go.  I can’t take this home with me.

Husband is coming to pick me up. He won tickets to see an early screening of Godzilla. I need mindless entertainment tonight.  Thank goodness my mom can stay with the kids. 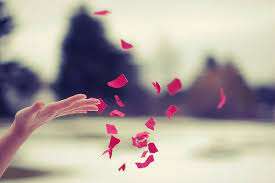